Origins Of An Infinite Universe? A Fractal Conversation... 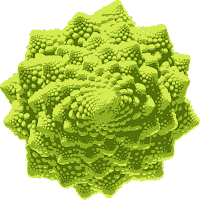 From:  violetplanet.blogspot.com
THE PREMISE: "Galaxy Map Hints At Fractal Universe":

Is the matter in the universe arranged in a fractal pattern? A new study of nearly a million galaxies suggests it is – though there are no well-accepted theories to explain why that would be so.
Cosmologists trying to reconstruct the entire history of the universe have precious few clues from which to work. One key clue is the distribution of matter throughout space, which has been sculpted for nearly 14 billion years by the competing forces of gravity and cosmic expansion. If there is a pattern in the sky, it encodes the secrets of the universe. A lot is at stake, and the matter distribution has become a source of impassioned debate between those who say the distribution is smooth and homogeneous and those who say it is hierarchically structured and clumpy, like a fractal.
Nearly all physicists agree that on relatively small scales the distribution is fractal-like: hundreds of billions of stars group together to form galaxies, galaxies clump together to form clusters, and clusters amass into superclusters.
The point of contention, however, is what happens at even larger scales. According to most physicists, this Russian doll-style clustering comes to an end and the universe, on large scales, becomes homogeneous. But a small team of physicists, including Francesco Sylos Labini of the Enrico Fermi Centre in Rome and Luciano Pietronero of the University of Rome argue that the data shows the opposite: the universe continues to look fractal as far out as our telescopes can see... Article Continues Here

Noun: A curve or geometric figure, each part of which has the same statistical character as the whole. Fractals are useful in modeling structures (such as eroded coastlines or snowflakes) in which similar patterns recur at progressively smaller scales, and in describing partly random or chaotic. -New Oxford American Dictionary, 2008.

VioletPlanet: Fascinating article. You must educate me. In layman’s terms what does this mean? What is the concept of a fractal universe?

IvansArmy: Usually, Fractal is used when referring to a fractal system. In layman's terms a fractal is a part of a system or a whole (singularity) which in itself possesses all the information necessary to create a singularity or a system of its own. The most obvious fractal example is Nature. You have a seed or a singularity which grows into a plant with a stem and the off-shoots. The leaves or branches divide into their own singularities; then you can say that we are fractals of our parents since we literally come out of them and contain their DNA.

In mathematics there are fractal equations which may be represented as fractal graphs. One of the key characteristics of these graphs is that you may "zoom" or scale into the graph indefinitely with new geometric structures being created by the equation into infinity.

You may see how it becomes very intuitive to view the entire universe as an infinite, complex, fractal structure. This is not really any groundbreaking idea, but it's only recently that our"modern" science is coming to terms with reality and shedding some old abstract ideas about the nature of existence. These ideas are mainly influenced by a specific point of view held in the West that we (as self-conscious beings) are observers separate from the universe in which we exist. This point of view is not necessarily directly expressed but is more a state of self-consciousness which observes the universe but is not aware of its own state and therefore has fundamental hang-ups in its perception of itself and everything around it.

VioletPlanet: So...Quantum Physics is definitely true in this case. We are all connected and the universe is the seed.

IvansArmy: We are all...the universe. To be connected to the universe assumes that in some way we are "other" and therefore need to connect to it. We just are...IT. There is nothing but the universe so "we" cannot be other from...IT.

VioletPlanet: But didn't the universe ever have a beginning...hence "the seed?" Or has it always been infinite or shall we say immortal? Is it possible for anything to be immortal?

IvansArmy: Death and life are very relative concepts. There is a birth and a death of the ego or what we think of as...I. However, the line between life and death becomes blurred when you ask... what is the exact point of differentiation in time between the two and who is doing the measuring? For the purposes of convenience, we say someone is born on the day they come out of mother's womb. However, does this mean that the previous day that same person was not alive? When does life start? Is it during Gastrulation when bases of all the rest of the tissues are created? Or is it upon fertilization of the egg? Or is it when the spermatozoa are created in the testicles of the father and the ovum in mother? Or is it the birth of the mother and the father? We could say that life and death are complements of each other or duality of being. Therefore, immortality as the western dualistic and moralistic philosophy might view it...does not exist because it implies absence of death, which is absurd since things die daily.
Another problem with "immortality" is that it implies a concept of linear time which is purely an abstract human concept created for utilitarian purposes. We forget that just like the number 3, or the equator line, time as we perceive it...is purely an abstract human construct and the true reality of time is inconceivable purely through the linear data-processing of our mind. In this sense, when we talk about immortality what is usually implied is a constant unchangeable measure of time which is divorced from the universe in which it exists and therefore is non-existent.

Scientists are a part of our culture and they view the world through the "lens" of the Ego or the finite "I." This is logical to them: I (the Ego) have a beginning and an end. Therefore, the universe must have a beginning and end. Yet, when you were born your body did not come out of nothing but was constructed with atoms of numerous elements which were utilized by other systems (bodies of your parents) to assemble you. When you die your body does not disappear into thin air but is dissolved back into the environment. The molecules and atoms are recycled into other life forms, particles of dust, soil, plants, etc. Therefore, it's not possible to claim with any degree of certainty that the universe had a definite beginning before...which it did not exist. I am not saying there was no big bang or a similar happening, but it's false to assume the universe's non-existence prior to the happening. Universe is immortal purely in its existence.

VioletPlanet: Life and death on earth parallel life and death within the universe, the death of stars, planets, black holes are dead etc. Therefore, the inter-connectedness makes sense. We would mimic that which created us. There is an order to things...which is infinite. The earth is one gigantic cell within the universal body. The cycle the universe offers us is cyclical: life, death, life, death etc. However, all cells die. We know when we die on earth that our bodies become fertilizer. However, if the earth were to die, would it regenerate into something else? Would that something else be alive or dead or a better word....functioning? What fertilizes the universe? I totally agree re: man-made time construct but if the universe's structure is cyclical at what point was the circle constructed? At what point did the circle begin?

IvansArmy: Trying to answer that question is like chasing a ghost. It's entirely relative to who is observing. If we say we're "observing" and we concluded that we're the universe then it's us"observing...ourselves," hence the impetus to ask the question: when did I begin. Postulating that question divides us from our true existence. It implies we are something other than ourselves observing that "other" in Euclidean time and space. The problem is impossible to solve since it requires "othering" from the universe in order to observe it which creates an abstract reality. Ultimately, even if there is a logical answer, I believe a much more relevant and question is: Why is this answer so important?... or even better, Who wants to know?

IvansArmy: Why must there be a beginning, and how do you define beginning and end?

VioletPlanet: A singular point of origin...everything originates from something else. Endings are just new beginnings. In other words, has it been scientifically proven that the universe is infinite or is there something greater and more vast than the universe? If the fractal article is correct then by your own description and the picture you sent me of the cauliflower, an origin must exist. Notice the base of the cauliflower and notice the top of the cauliflower. There are two distinct points.

IvansArmy: You have just answered your own question. Science cannot with any certainty prove its major theories about the beginning of the universe, hence the theories. Origin of something does not necessarily mean...a beginning.

Posted by Ivan at 12:24
Email ThisBlogThis!Share to TwitterShare to FacebookShare to Pinterest

All rights reserved.
Content can not be used without written permission from the author.
© 2012 Ivan's Army™